What an epic event this was.

John had attempted this event a year ago with one of his friends but had had to retire due to poor conditions and difficultly navigating so had unfinished business with it. He was away the week before the race this year and didn’t think he would be back in time but then as soon as he found out he would signed up to the last available places in the C category which suited me having never done anything like this before. He asked me to join him and because I’m always intrigued by new events and challenging myself I agreed to it. I don’t actually think I really thought this through properly though and on the night after a couple of hours of sleep, sat in the van listening to the howling wind I seriously started to question my sanity…why do I agree to things like this?!

As this race was run over night we decided on the Friday to try and change our body clocks so stayed up late in the hope we would get up late and give us more chance of not being totally sleep deprived for the run. However, we didn’t quite sleep in as long as hoped and all it did was mean we were rushing around trying to get sorted for the race, packing…re packing…re packing again, getting nervous, and as a result not eating quite as well as we should have done before embarking on an adventure such as this!

However, we made it to registration in good time to find out we would be the last team setting off. The way this race works is there are various different categories: Elite, A, B, C and then a short and long course. The difference between the Elite, A, B and C course was distance to run, height gain and number of check points to find. The long and short courses were like orienteering events with each checkpoint having a points value. At registration we had our kit checked to make sure we had all essential items for survival on the fells in winter conditions should we need to set up camp, issued dibbers and this year had a GPS tracking device strapped to our rucksack that had an SOS button should we get into serious trouble. John was petrified of accidentally pressing it, it’s like one of those things you know to stay away from but because of that you are instantly drawn to it! Thankfully it never got pressed for any reason!!

After registering we went and found the pub and had a good hearty meal before heading back to the van to try and get some sleep before we started. On the way to the van it started to snow and the wind was picking up, I realised this was going to be some what challenging! I think I managed to get my head down for a few hours but it was really distracting to see head torches in the dark disappearing in different directions as teams set off.

The alarm went off and so up we got, putting on layer upon layer of clothing, waterproofs and hats etc trying to decide what the best system would be. Pre race material advised you too run warm….I usually run cold meaning I rely on warming up once I start running however this race was different so I went with the advice and carried 2 down type jackets as extra with me too. Setting off last was so unnerving with everyone disappearing off for their allocated slot. Each team was set off in intervals adding to the challenge of the event.

I can quite honestly say I did not want to get out that van and had to have a very strict word with myself.  We made a plan..

..the aim of the night was to make it round..

…that was all, just finish safely and enjoy the event as much as possible.
We set off in to the night and straight away for the first checkpoint we realised that we were going to have to concentrate the best we could and truly work as a team if we were to get to the end. The first check point wasn’t quite where we initially thought but realised just in time before we made a pretty stupid error. It’s amazing how disorientating darkness and fatigue can be. From then on we would get to a checkpoint and then take the time to assess the best line to the next check point and discuss alternatives and then make a plan ensuring we stuck to that plan. Taking that time I feel helped us achieve what we did and I am proud at the way we negotiated and discussed each section.. We had our moments but working together soon rectified potential errors before they happened.

What I found really quite unnerving is the fact that every now and then you would cross paths with another team going in a completely different direction or you think you are on the same course and have teams that appear to be going the same way but then all of a sudden disappear. It really makes you start to question where you are going, is it the right direction? Have we missed something? and it took a lot of strength to be confident in our ability. It was a weird one too as mentally I felt really alert, more so than any other type of fell race and I think it was simply because of the darkness, the risk of getting lost in those conditions and fear of making a mistake. I never checked the time, I didn’t want to know but as the night drew on my body just got heavier. I started the run feeling ok but perhaps not as sprightly as I normally do before an event, probably because of the time of day…my body was ready to sleep! Climbs felt harder than I think they would have done had it been daytime and the final climb we had to do just felt like it went on and on. I made the error on this one thinking it would be good to eat a peanut butter sandwich….not advisable, I then spent the rest of the climb struggling to breath and swallow that stupid sandwich that had now coated the whole of my mouth and had completely dried me out!!

The weather was pretty grim the whole way round, the worst being horizontal hail in my face…pretty painful to be honest but I joked around about how I hadn’t anticipated a free facial! It was having ridiculous conversations like this which kept morale up and kept us going. We had mud to get through, snow to trudge up and down and rivers to cross. Thankfully these were lower than the waist height we had been warned about the week before, they still came up past my knees but I’ll take that over past my waist any day. We made it through them all without getting swepped away, I did however manage to sit in possibly the smallest crossing we had to do…I couldn’t even call it a stream…more of a trickle and I don’t really know what happened but I ended up sat in it with lovely cold water flowing down my trouser legs…what more could you want at who knows what time in the morning on a Sunday!!!

The whole event was just amazing and I thoroughly enjoyed it in the end. Layering was perfect, I only got a little cold after the last SOS stop. My toes got a little chilly as we had to stop to swap gloves and change my head torch battery which decided to pack in.. I now know why they insist on you having a spare! However once we got going again I soon warmed up :-).

As we neared the end it started to become apparent to us that we may have done quite well as when we finished we found out we were the first ones back from our category. Given we were the last ones to start this sounded mental…we were totally shocked and to be honest we didn’t quite believe it until the presentation. The aim had been to finish…we totally exceeded any expectations we had and I felt quite proud in what we had achieved! Needless to say we got home and went to the pub for a celebratory drink: 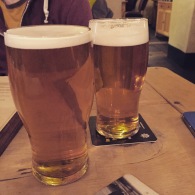 The plan was to stay awake as long as we could that day but that lasted until about 2 when we both just passed out trying to watch a film!

Last to start…First to finish!

This event was absolutely amazing and I would highly recommend it. The organisation was flawless, organisers were friendly and supportive and even out on the fells volunteers were out to make sure runners were OK and offered support and advice. I’d like to reiterate…volunteers….these people volunteered to stay up all night to support runners and the event…just amazing and id like to say a massive thank you to them.  I learn a lot about myself during this event too, I need to be more confident in my ability and that I am capable of more than I think. For me and John… We can make one hell of team!!

Thank you to Steve Ashworth Photogtaphy for the event photo.